Back in August I reviewed The Play That Goes Wrong which was utterly hilarious, and now Mischief Theatre are back in Brighton again! This time with The Comedy About a Bank Robbery!

It’s the summer of 1958, and Minneapolis City Bank has been trusted to guard a $500,000 diamond! However when an escaped convict makes it his mission to steal the diamond, with the help of his girlfriend (whose dad actually manages the bank) everything seems to go wrong! Mistaken identities, love, lust and ulterior motives! Who actually ends up with the diamond? Well you will have to buy a ticket to find out!

David Coomber plays the role of Neil Cooper and was fantastic! I havent laughed as hard as I did whilst watching this show for a very long time! The comedy is so slap stick and stupid but then again is so well written and unnoticeable which is why it is so funny! 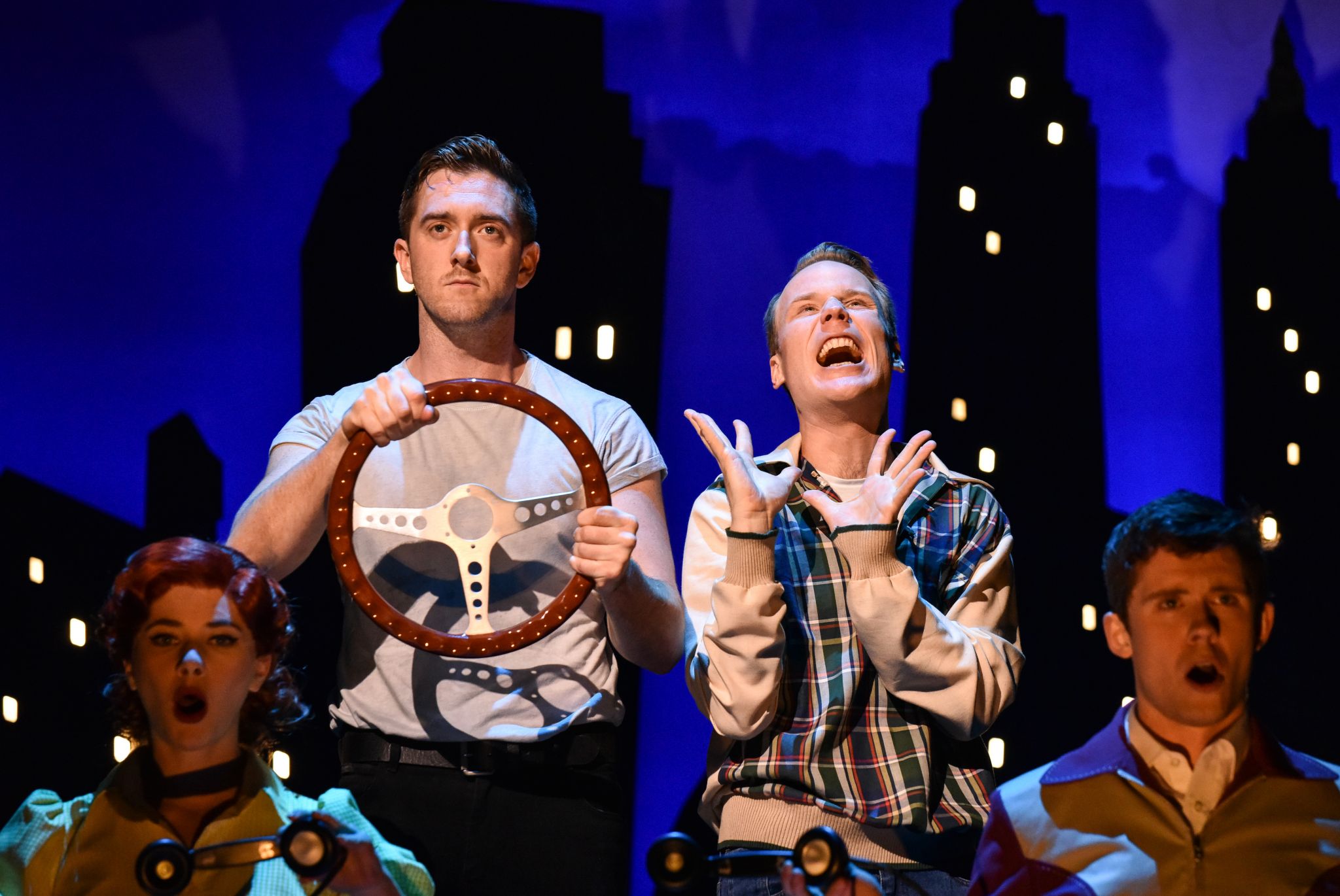 My favorite scene from the whole show was a scene in Caprice Freeboys apartment, starring Caprice (played by Understudy Charlotte Dufffy), Mitch Ruscitti (Liam Jeavons), Sam Monaghan (Sean Carey) and Robin Freeboys (Damian Lynch) – it was honestly comedy gold! Caprice is having a rendezvous with Sam, when her convict boyfriend Mitch turns up at the door . . Sam hides then Mr Freeboys (Caprice’s dad) turns up! Sam attempts to leave the apartment many times, however keeps getting caught and pretends to be other people (I’m really not giving it justice in my descriptions! You have to see it to appreciate how funny it actually is!) 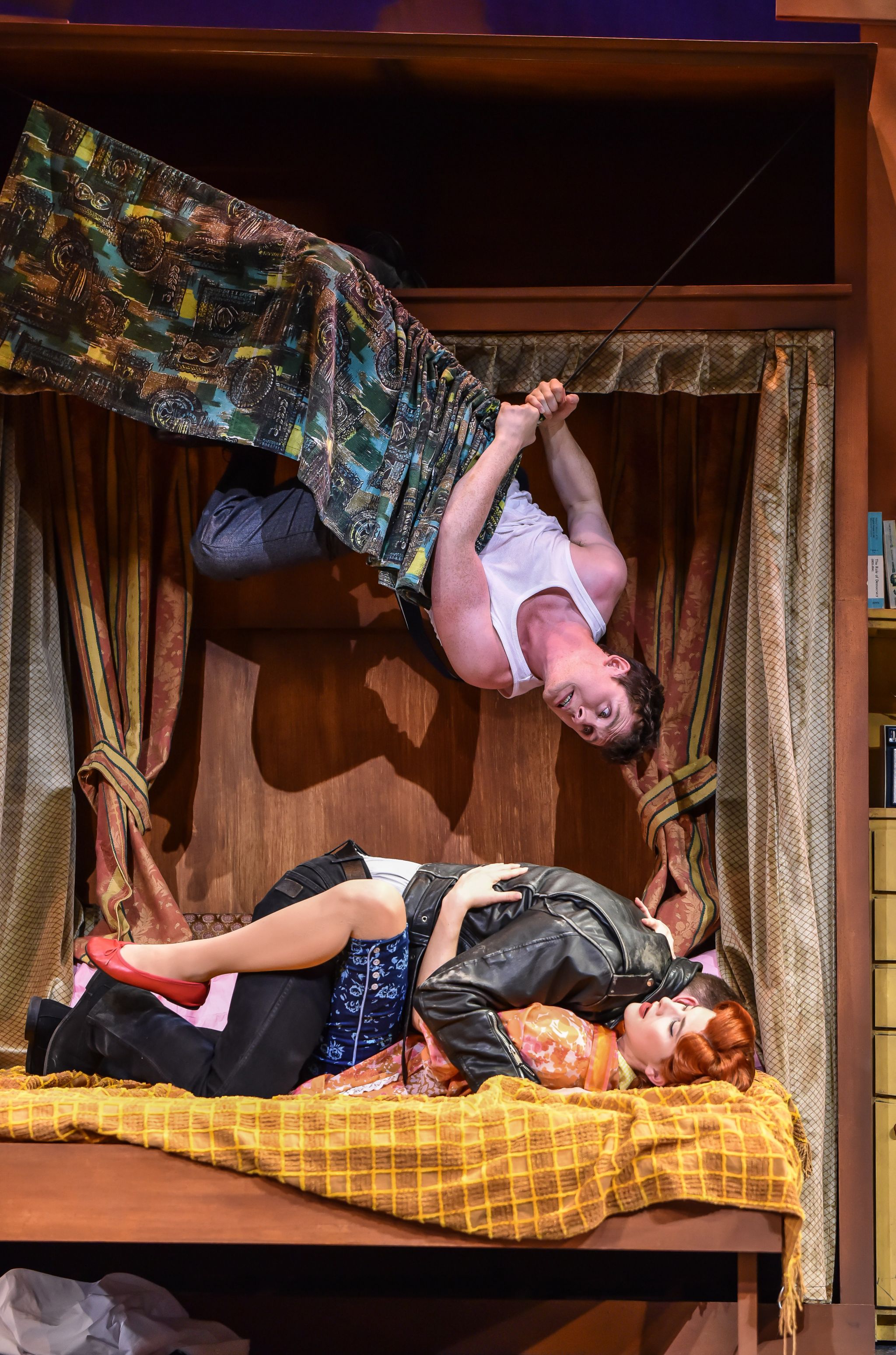 As you can see, Sam hasn’t really found a great hiding space!

I couldn’t help but see a similarity in Sean Carey who plays Sam Monaghan to iconic comedian Lee Evans! Visually, the way he moved and his comedic one liners! Truly fantastic!

The show is written by Henry Lewis, Jonathan Sayer and Henry Shields of Mischief Theatre and stars the Mischief Theatre Company who were responsible for the absolutely hilarious Olivier Award-winning Best New Comedy “The Play That Goes Wrong” which I have seen and loved! And also for “Peter Pan Goes Wrong” which I am yet to see, but really want to! 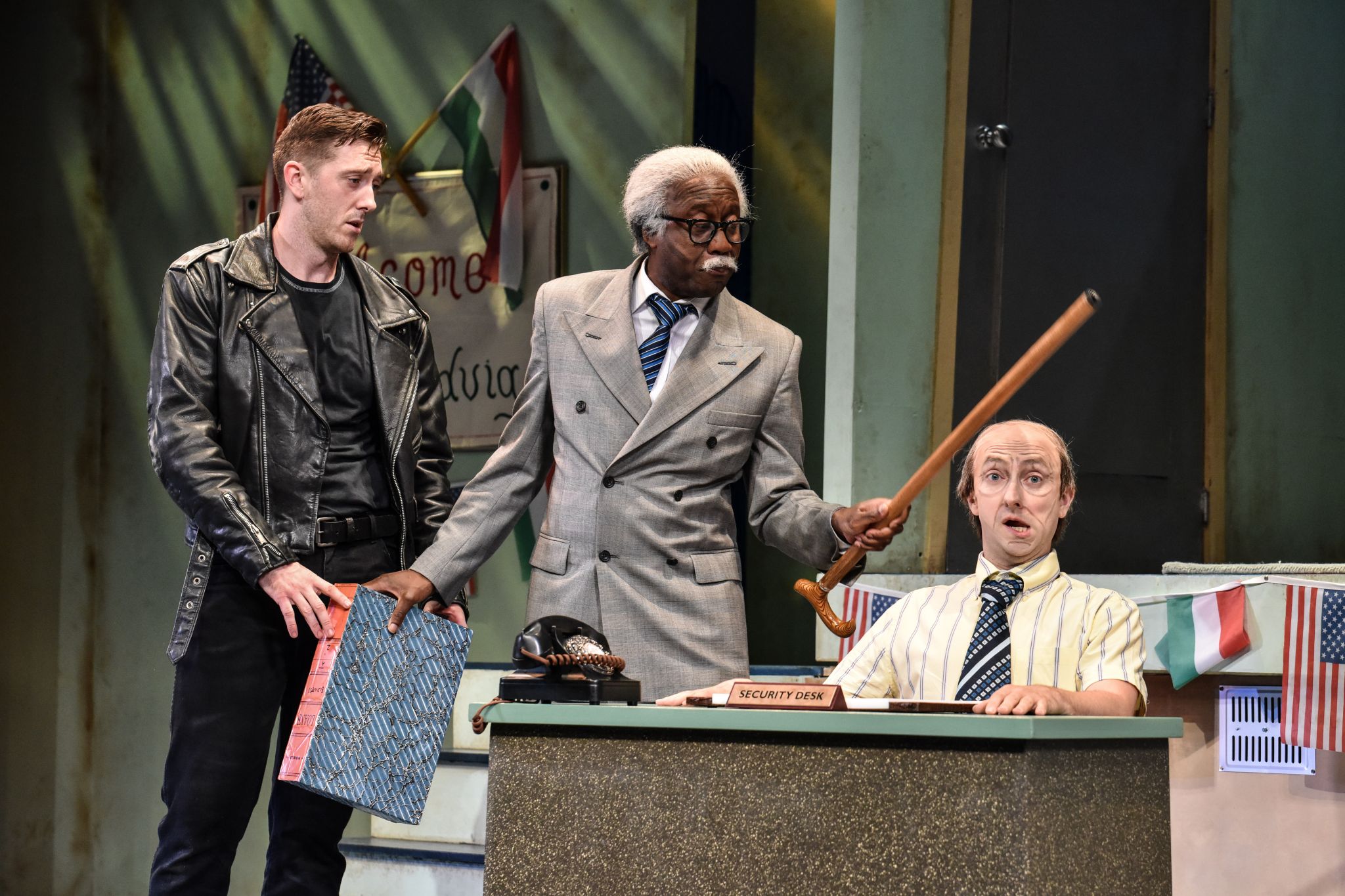 The show was everything I wanted it to be and more! I didn’t think The Play That Goes Wrong could be topped, but I think this definitely has! The innuendos are genius, the script is perfect in every-way, and the actors bring it all to life! I highly recommend you catch the show in a town near you! Full tour dates can be found HERE.

The Comedy About A Bank Robbery is at the Theatre Royal Brighton until Saturday 17th November 2018. Shows Monday – Saturday at 7.45pm, and matinee shows Wednesday, Thursday & Saturday at 2.30pm. Click HERE to book your tickets to experience an evening of laughter!