Crongton Knights is like an urban High School Musical but better! I was absolutely blown away by the show last night; it’s not like anything I’ve seen before, utterly fantastic and possibly the best show I’ve seen in 2020 so far!

The show takes you on an adventure with McKay and his friends ‘The Magnificent Six’ who are on a mission to collect V’s mobile phone which has been stolen by a disgruntled ex-boyfriend, the phone has explicit photos of her on it, and so she clearly will do anything to get it back! 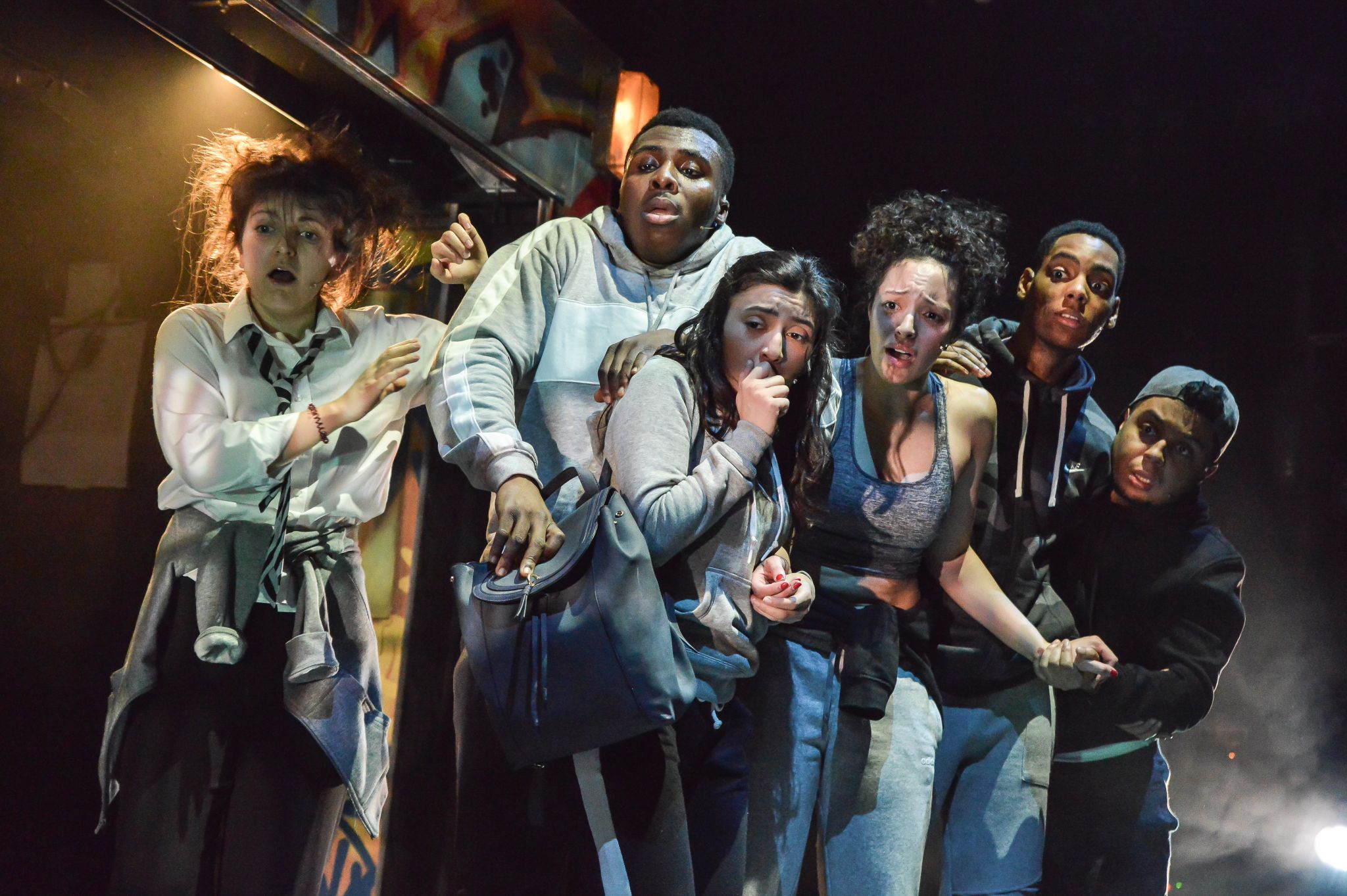 McKay and his crew leave their Crongton Estate to embark on the mission across town to Notre Dame a notorious gangland estate to collect the phone however danger is lurking and the mission goes further than any of them ever imagined.

If you’re a fan of Top Boy or the Kidulthood film series then this is the perfect show for you, I wasn’t really too sure what to expect and the show trailers do not give this show enough justice! The show incorporates common struggles in teens today, whilst adding some comedy and most importantly the music which brings it all together. 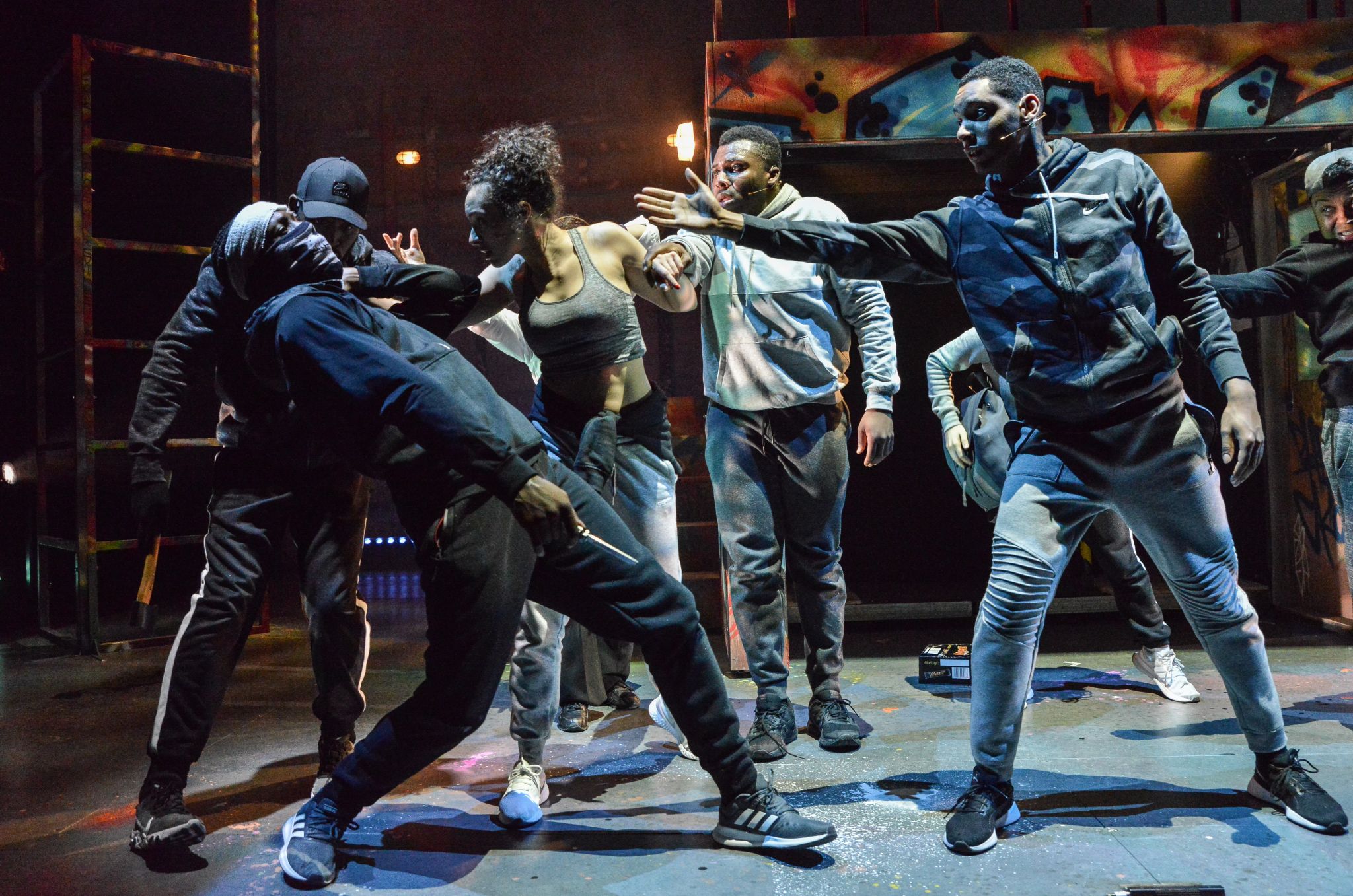 The show opened with a song, I had a feeling there would be music in it, and I’m so glad there was! Aimee Powell who plays Venetia “V” and Olisa Odele who plays McKay really stood out to me, they have fantastic voices. Aimee Powell has that gravely sounding voice which was perfect for the type of songs in the show, reminding me at times a little of Amy Winehouse and also Amelle Berrabah. 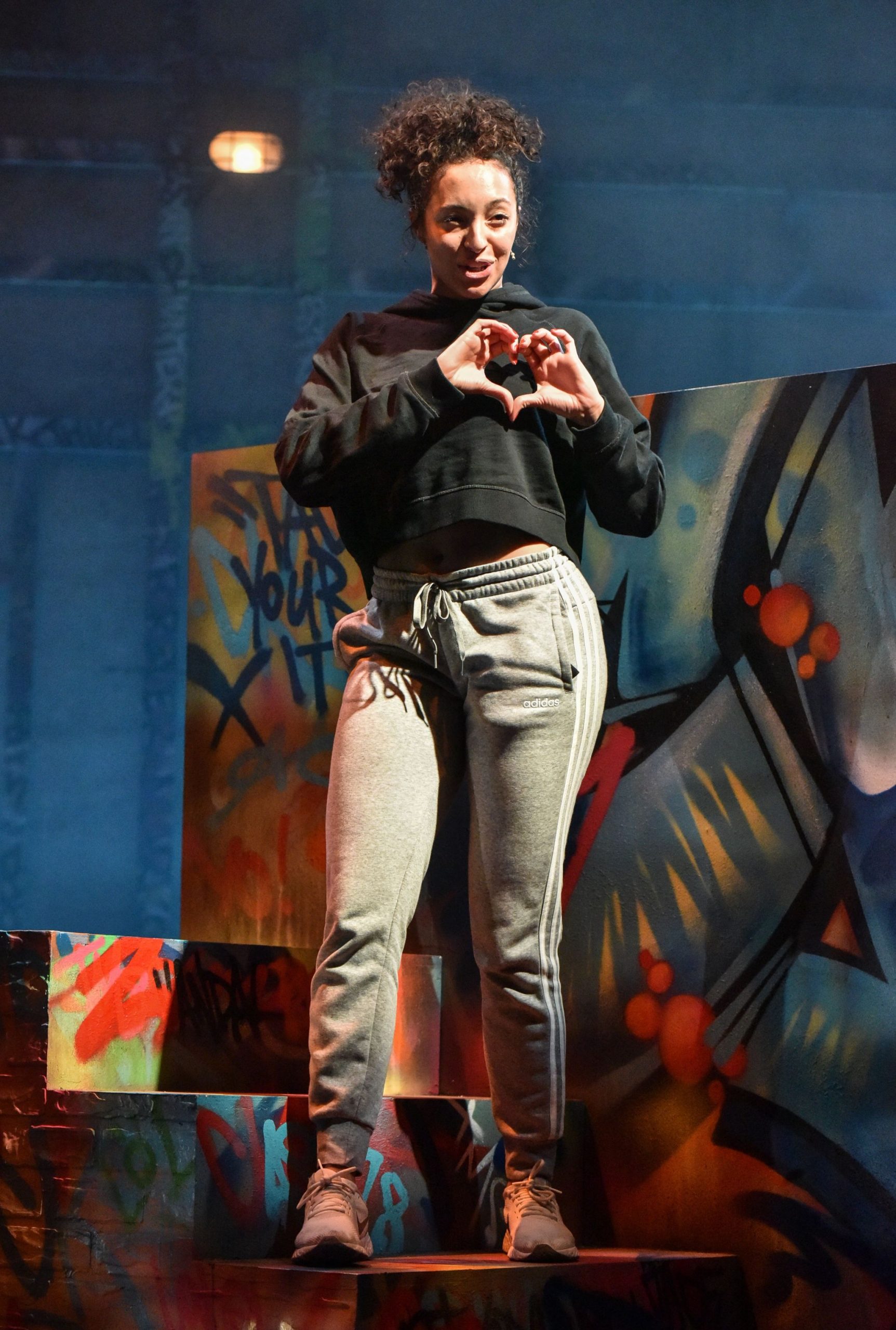 McKay played by Olisa Odele was probably my favourite character, he had the audience in stitches multiple times, along with Khai Shaw who plays Jonah who was equally funny but also had a very serious scene in the show. One of the funniest scenes which I won’t be forgetting for a while, is when the crew get to the door of V’s ex-boyfriend and a fight breaks out, and McKay ends up doing some kind of jump splits to hold the perpetrator down – I laughed out loud!

I enjoyed every part of the show, the stage was basic but that’s all it needed, it wasn’t about fancy staging and lights, it was about the story, the actors and the music. Dale Mathurin played the role of Nesta (McKay’s brother) who was excellent. A lot of the actors rapped on stage including Zak Douglas who plays Bit which I thought was fantastic, as it’s so current and such a good way to tell a story. 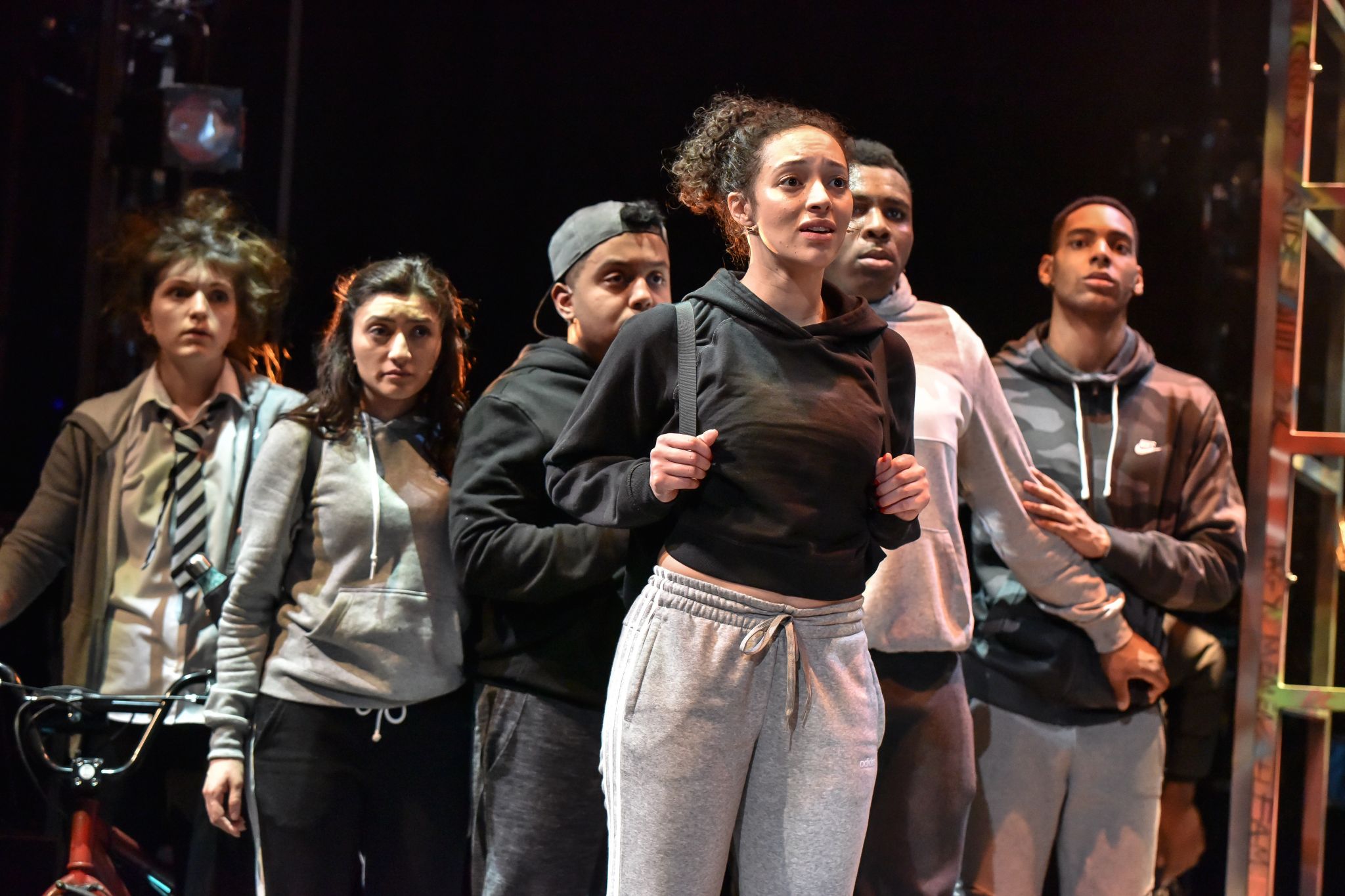 Crongton Knights is about friendship, which is played out in the show as outcast Bushkid played by Kate Donnachie ends up helping the crew in their mission and is later accepted as one of them. Bushkid was a great character and I’m sure a lot of youths today can relate to her story of not fitting in and not having anywhere they feel they belong. Nigar Yeva plays the role of Saira, again someone else who doesn’t really feel they belong and who is from a different culture and background but friendship pulls the crew together. 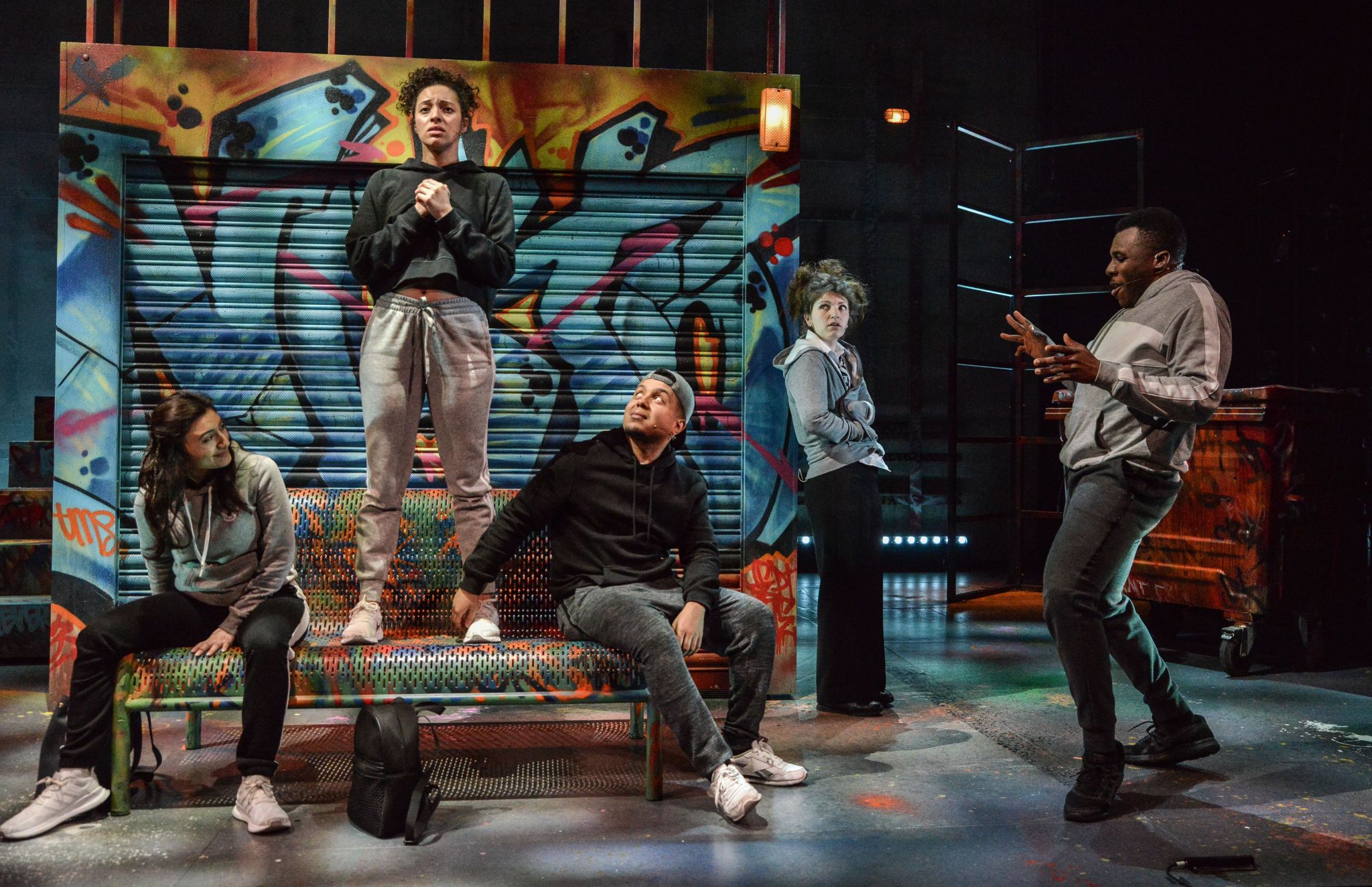 I was so happy to see such a variety of people watching the show last night, groups of teens on what looked like school trips (which is great, as the story and consequences of actions is a great lesson to be told) some of the older crowd I think where a little confused at times as to what was going on, but it’s important all types of ages are seeing shows like this! I took my 57 year old mother with me and she loved it, perfect viewing for every type of audience.

Crongton Knights is only at the Theatre Royal Brighton until Saturday 7th March 2020! So I really do suggest you book in ASAP to experience a different kind of theatre! Shows Thurs, Fri & Sat at 7.45pm, with matinee shows on Thurs & Sat at 2.30pm.  Let me know what you think of the show, and if you loved it as much as I did! Click HERE to book!