Last night I had the absolute pleasure of reviewing Nigel Slater’s Toast by Henry Filloux-Bennett at the Theatre Royal Brighton, where it runs until Saturday 2nd November 2019.

The play recreates Nigel Slater’s bitter-sweet memoirs of growing up in 1960s suburban England, and tells the tale of love, loss and . . . toast. 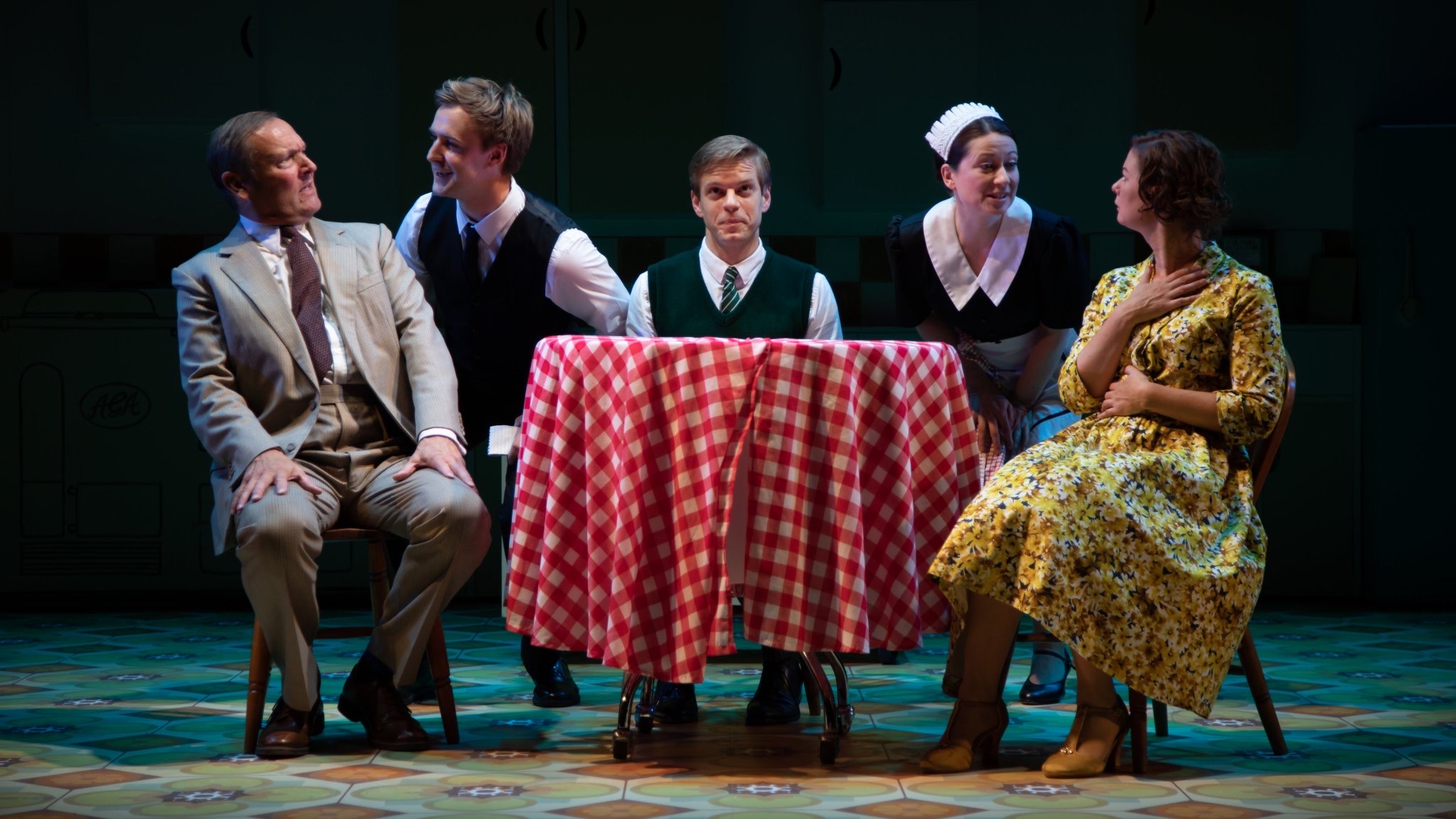 This isn’t the first time, Nigel Slater’s memoirs have been adapted, back in December 2010 the story was adapted into a biographical comedy-drama film for the BBC starring the legends Helena Bonham Carter and Ken Stott and also Freddie Highmore who has gone on to be massive staring in ‘Bates Motel’ and ‘The Good Doctor’ – I haven’t seen the film, but am now on the lookout for a copy!

Then In 2018, a stage adaptation of Toast was commissioned, written by Henry Filloux-Bennett and directed by Jonnie Riordan (which is the same production I saw last night) the play was a sell out at the Week 53 Festival, and was transferred to the Traverse Theatre at Edinburgh Fringe Festival before transferring to The Other Palace in London and finally in April 2019 it was announced that Toast would embark on a UK National Tour and I’m so glad they did!

Who is Nigel Slater?
Nigel Slater born in April 1958, in Wolverhampton, West Midlands is an English food writer, journalist and broadcaster. Slater studied catering at Worcester Technical College in 1976 and worked in restaurants and hotels across the UK before becoming a food writer for the monthly magazine Marie Claire in 1988, before moving to The Observer where he has had a column since 1993! 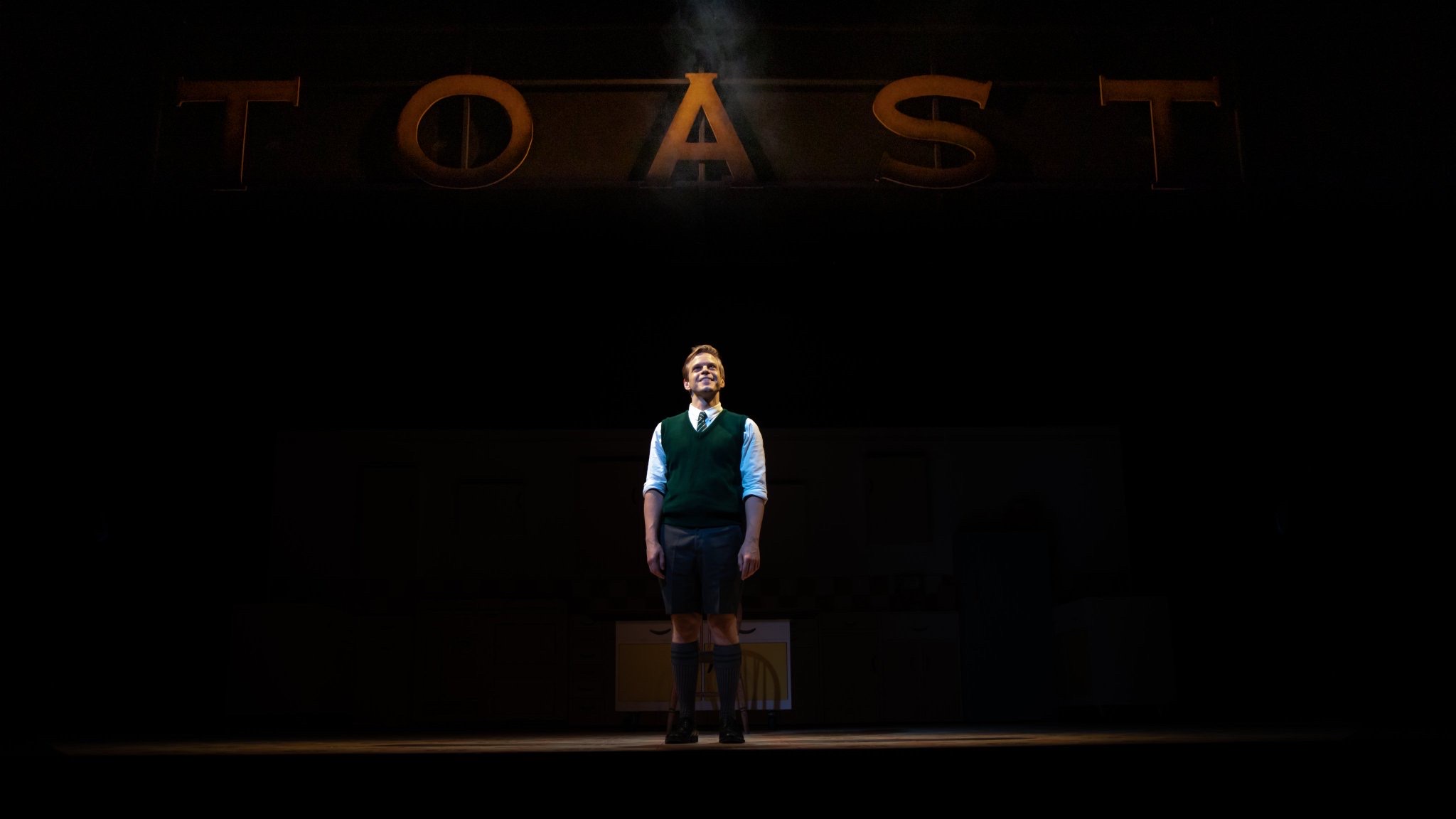 I’ve been really looking forward to this production! I absolutely love a true story or any type of biographical adaption as the stories just seem so much more believable . . . probably because they are based on actual real life facts!

The play focuses on Nigel’s childhood, from the age of 9 to 16, from his happy-ish family home in Wolverhampton to his unhappy Worcestershire move and finally his escape to London!

Giles Cooper does an absolutely fantastic job in his role of Nigel, and plays the very confused and naive character very well! Nigel’s relationships with his loving mother (Katy Federman) and his distant unloving father (Blair Plant) are so heart wrenching, the play has a lot of moments which could bring a tear to your eye.

The play features only 5 cast members, taking on multiple roles (which I absolutely loved and found hilarious!) I was speaking with a few people in the interval of the older persuasion who said the show was bringing back all kinds of nostalgia for them from the school scenes to the sweet shop and butcher scenes, it was a like a trip down memory lane! Not to say you need to have been a child in the 60s/70s to understand the play, because I understood it fully.

The scenes between Nigel (Giles Cooper) and his Mother (Katy Federman) were seamlessly heart-warming, baking mice pies, making toast, laughing and joking – everything you do with your own mum, so it’s relatable and really hits you in the heart when tragedy strikes! 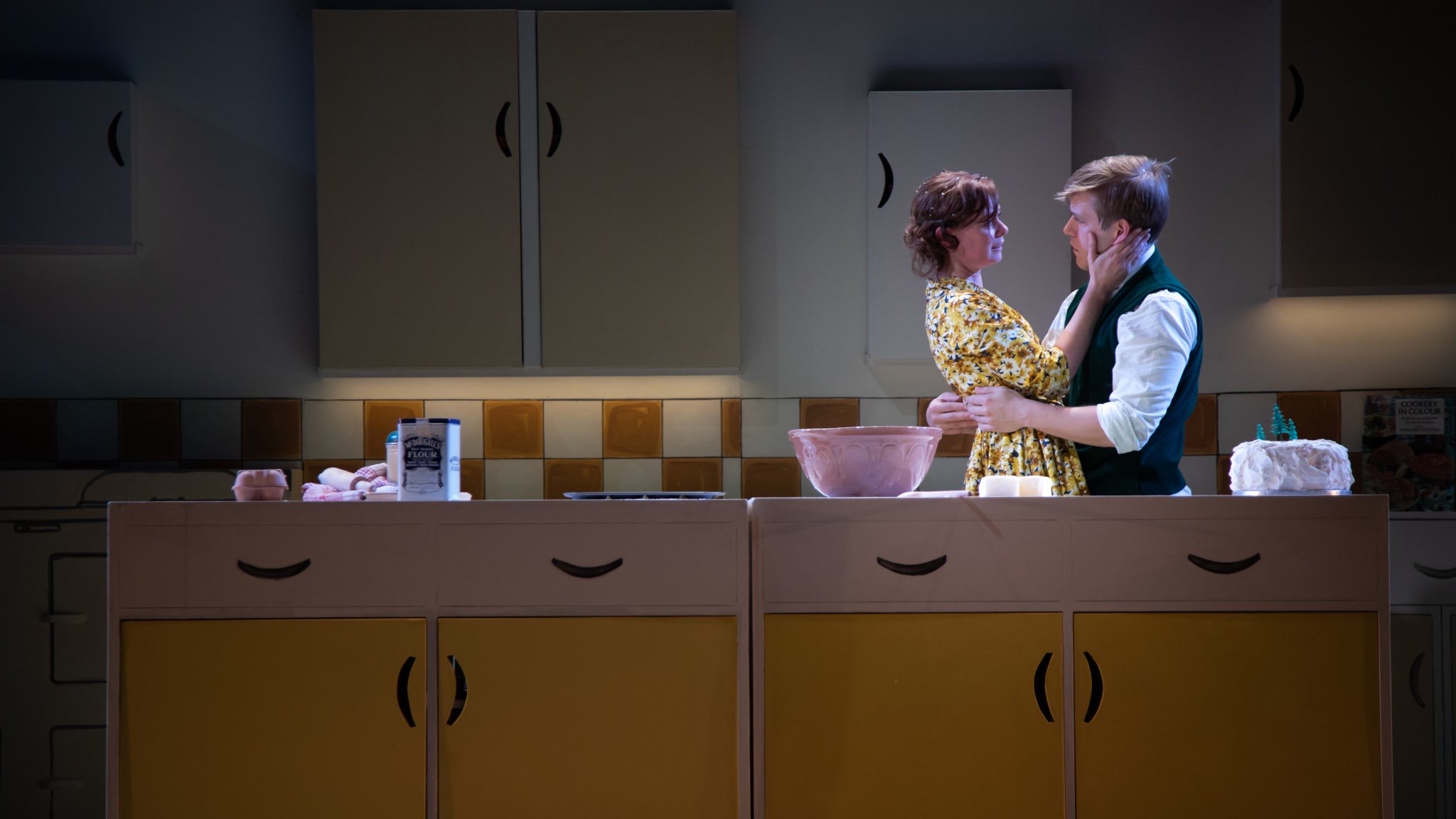 Joan (Samantha Hopkins) is later in the play, Nigel’s Step Mother, I wanted to hate the character but Hopkins adds a comedic value to the character which had me in fits of laughter! From her accent to the dialogue and her movement on stage I absolutely loved this character.

Stefan Edwards plays multiple characters, including Josh the Gardener, a school boy, sweet shop worker etc. but for me it was the dancing scenes (cannot think of a better term to use) which Edwards was included In which I loved, some of the chorography was hilarious! The same is said for Nigel’s Dad (Blair Plant) along with playing the abusive, unloving father which Plant did very well, he was also included in the choreographed scenes which I loved. 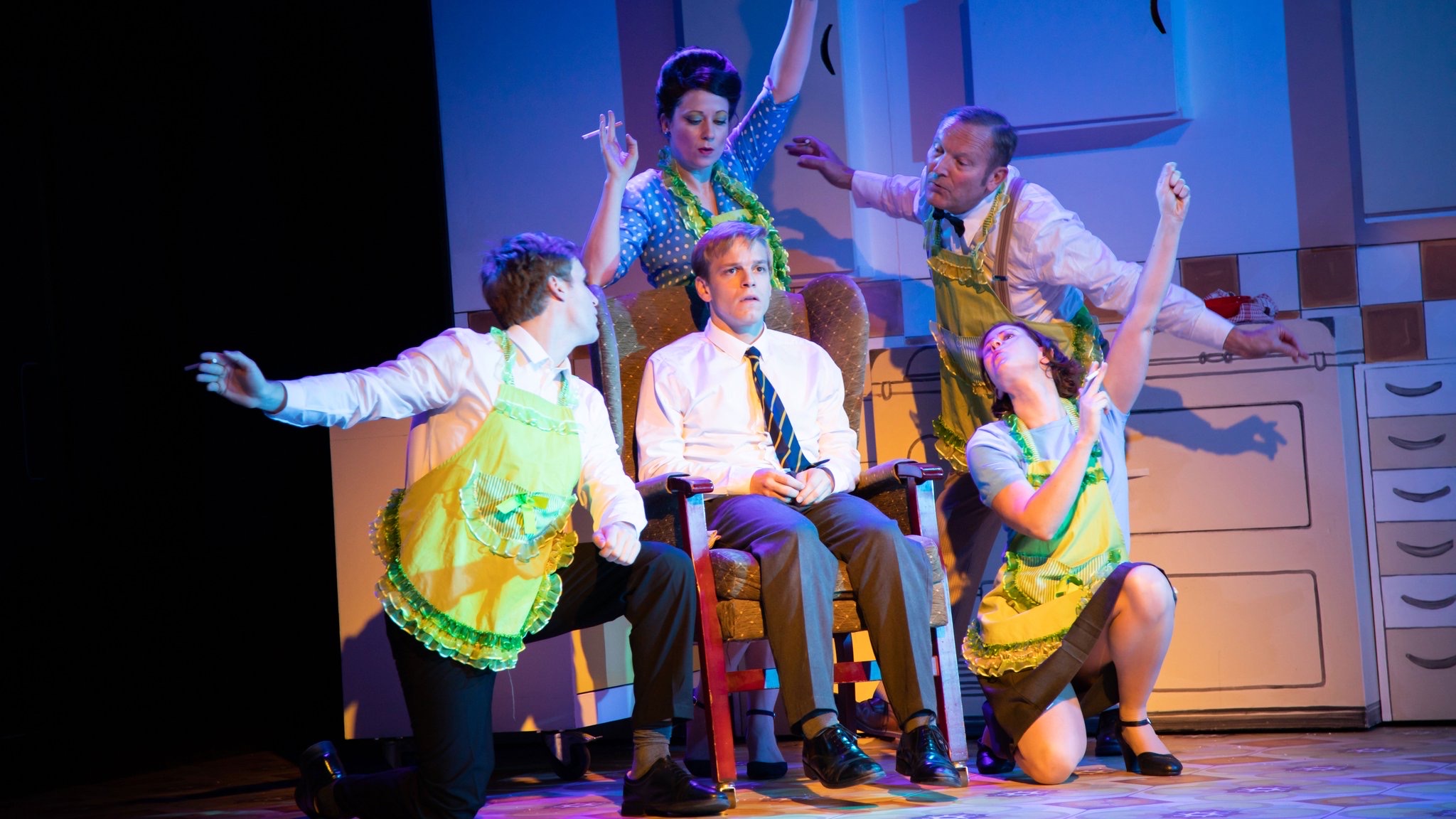 I’m not really too sure how I would describe Toast, its heartfelt, it’s tragic, but it’s also hilarious and every so often the record player comes out and everyone breaks out into dance! I loved every minute of it and thought the mishmash of fun vs tragedy worked really well! Also no need to call the fire brigade, when you walk into the theatre they pipe the smell of burnt toast into the theatre which I thought was fantastic! No detail left unturned!

The staging is basic, but it’s all you need for this type of play. The movement on stage was I thought the best I had ever seen, so clean and neat, everything looked perfect! I loved the cutaways between scenes/years where a dance or song would change the set ever so slightly. 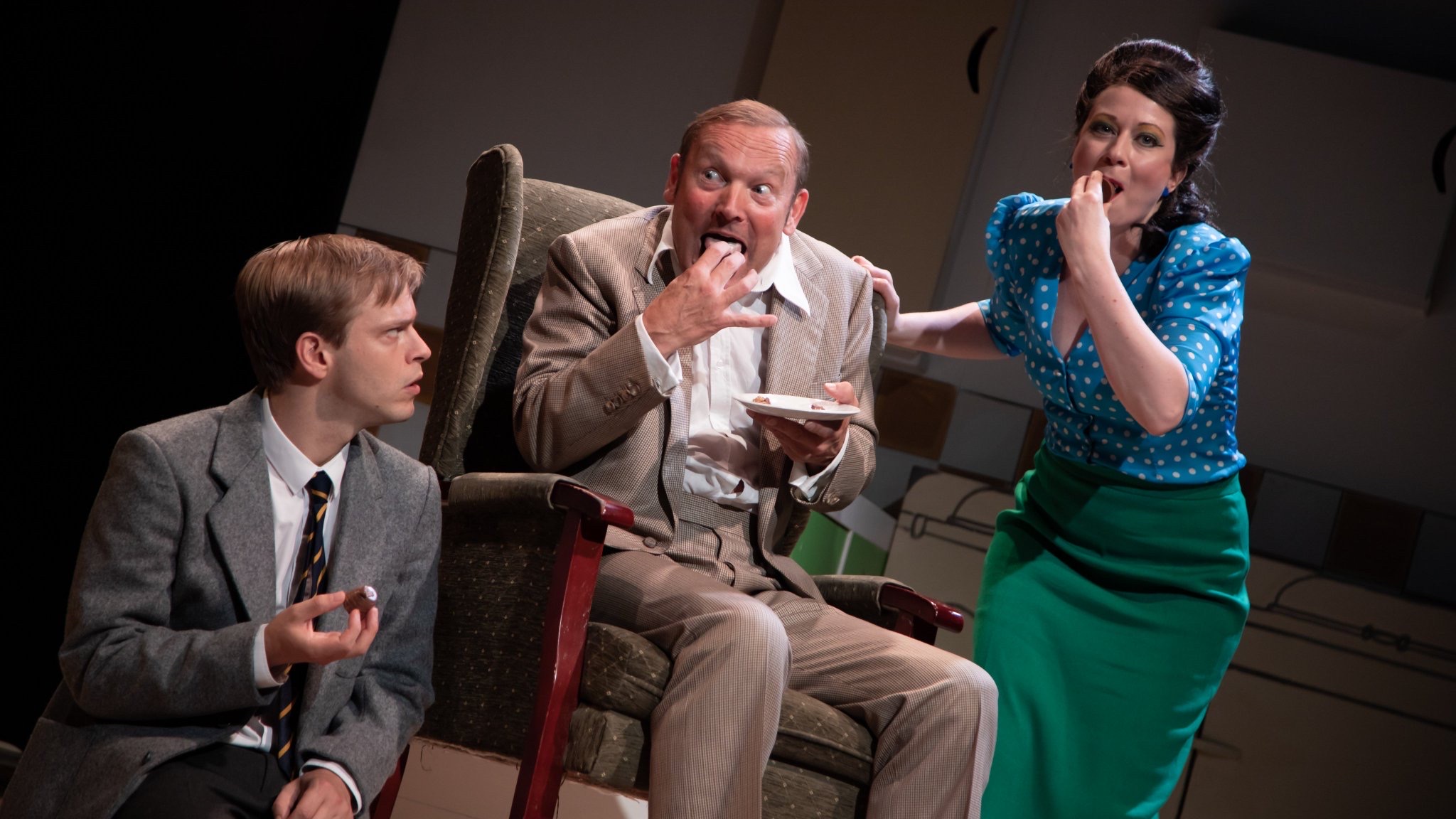 I’m not going to tell you too much about the Walnut Whip scene, but it’s hilarious!

As you can probably tell, I LOVED it! I now need to somehow find a copy of the BBC film, and also purchase the autobiography ‘Toast: The Story of a Boy’s Hunger’ as I want to find out more!

Toast is at the Theatre Royal Brighton, until Saturday 2nd November 2019, with shows every evening at 7.45pm, and matinee shows Thursday & Saturday at 2.30pm. Click HERE to book and take a trip down memory lane.