WOW! Probably the best word to describe Hair: The Musical! I knew the musical was about hippies and free love, but I didn’t expect it to be as funny and fantastic as it was! I felt like I was in a dream for 2 and a half hours which I didn’t want to end!

Set in 1967 in the East Village of New York, we meet ‘the tribe’ who are a bunch of free loving, sexually liberated and free hippies who basically love to get high and have visions of changing the world, under the shadow of the Vietnam War.

The musical still has relevance to this day, as it tackles subjects like racism, gay rights and war, so it’s a timeless musical which adds a little humour to the whole situation, which to be honest we all need!

This is Hair’s 50th anniversary production, and direct from a sell-out London run! The musical was the winner of the 2018 WhatsOnStage Award and has earned itself many accolades over its 50 year run! I didn’t think I’d recognise any songs, but I literally knew them all! ‘Aquarius’, ‘Let the Sunshine In’, ‘I Got Life’ and ‘Good Morning Starshine’, are just a few of the songs which will get you dancing!

Within the first 5 minutes of the show, my shoulders and hair were groped by the cast as they entered the stage, and Dancing on Ice Winner Jake Quickenden was basically in the buff and grinding himself down the man in front of me! This is when I started to question what I had signed up to! But it’s all good fun and utterly hilarious! People LOVED it! Quickenden plays the role of Berger one of the lead characters, and was excellent! The songs really complimented his voice, and he smashed each and every one! He also had some extremely funny scenes in the show which had the whole audience in hysterics! 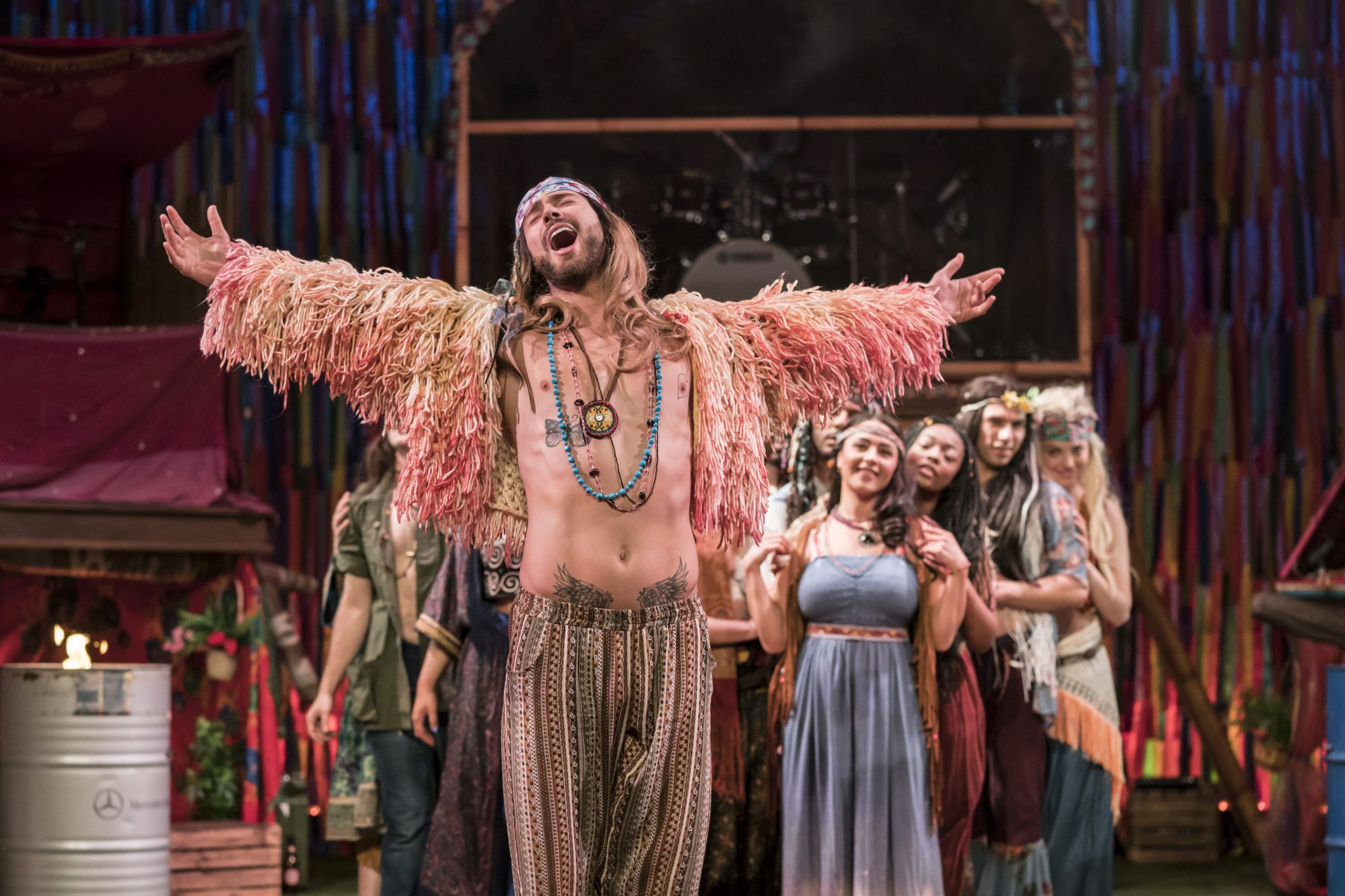 Daisy Wood-Davis best known for her role as crazy Kim Butterfield in Hollyoaks plays the role of Sheilawith X-Factors Marcus Collins as Hud! Both had fantastic voices, I have seen Collins in shows previously who is always fantastic, but it was my first-time seeing Wood-Davis is a musical who was sensational.

Aiesha Pease plays the role of Dionne and has some of the best vocals! She kept reminding me of Jennifer Hudson and would not look out of place in Dream Girls! 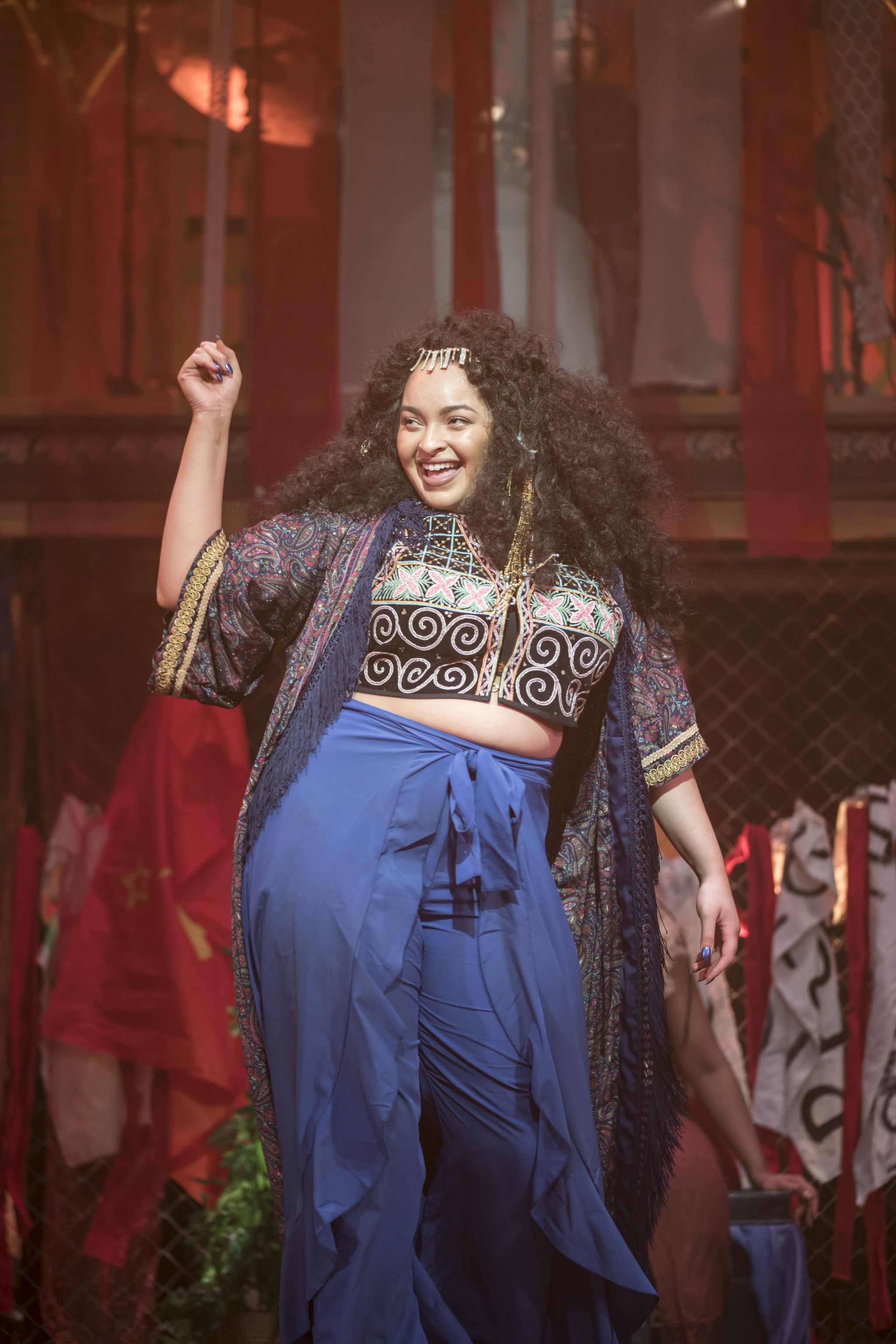 The stage was totally transformed! A really high set made up of colours, ribbon wraps and various earthy tree stumps male the whole experience more inclusive, at some points I literally thought I was in the 60’s and in the tribe! The costumes were also excellent which made the whole show that much more authentic! Great work by set and costume designer Maeve Black.

Purchase your ticket now, to join the tribe and experience the intoxicating power of freedom, love and equality for all! Hair: The Musical is at the Theatre Royal Brighton until Saturday 13th July 2019. Shows every evening at 7.45pm, and matinee shows Thursday & Saturday at 2.30pm. Click HERE to book your tickets!